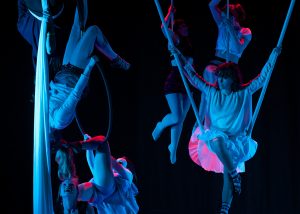 Cirque Du Chennai was born out of one person’s passion for hanging upside down, paired with a need to raise loads of cash for charity so they could travel to India with the charity Chennai Challenge.

In 2014, Tamsin was planning to travel to India with Chennai Challenge to work with destitute children, and in order to do this she needed to raise at least £1500. She had fundraised for this trip in the past and year on year it was becoming harder and harder to raise those much needed funds.

Tamsin had began to become quite good at trapeze by this point, having had lessons weekly for the last 3 years. She had noted that a lot of her cohort and herself were itching to perform and there were very few opportunities for students to perform all those skills that they have trained so hard in over the years.

She had a crazy idea that it might be fun to try and put on a circus show (but really it was because she wanted to show off in front of her friends!).

The show’s name came from the original reason for raising money, and continued to be between 2014 and 2016, but the show has become a yearly fundraising event for a different charity each year.

We found our home in The Arthur Cotterell Theatre in Kingston College, and it suits us so well. We are a collective of regular performers, both amateur and professionals, and we have new acts and new students every single year.

So far we have raised money for…